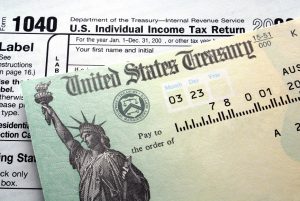 So you’ve got a big refund coming this year, huh?  Whatcha gonna do with it?  Pay a bill?  Save it?  Buy some shiny new toy?  Newsflash!  Whatever it is you plan on doing with it, it doesn’t matter.  Because you’ve already lost a lot of dough in the game of personal finance.    Sorry if I busted some bubbles, but I’m not here to make you feel good.  I’m here to tell the hard truth so you can max out your money.  Let me tell you what I mean.

I remember back to when I was much younger, about 19 years old.  I was working in an investment bank at the time.  As you can imagine, there were a lot of wealthy VP’s and such there.  I used to rub shoulders with them every day in the course of my job function.  Anyway, I’ll never forget what one guy told me one day.  He told me he had to pay the government about $4,000 when he filed his taxes.  I was like “What???  Are you crazy?  Why didn’t you make sure you got a refund?”  It was at that point that he literally sat me down and educated me in the ways of the wealthy and how they view paying taxes.  What I’m about to share with you stems from the lessons I learned that day.

To start, according to IRS.gov the average refund was $3,120 in 2016.  That means the average taxpayer over-paid the government by $260 each month!

What could you do with an extra $260 in your pocket each month?  Get that debt monkey off your back quicker?  Save for a vacation or a used car?  Or maybe you could build a wicked emergency fund so you don’t have to resort to Visa or Mastercard every time some unexpected expense pops up.

Let me show you another thing you could do with it.

You see, based on a GoBankingRates.com survey from September of 2016, more than half of all Americans don’t have $1,000 saved to deal with an emergency!  And according to a CNBC article from the same time period, the median household retirement savings was just $5,000!  So if you were to make this simple change of putting an end to lending your money interest free to the government, you could beat both those statistics in less than two years.

Now that you know the cost of getting a tax refund from the government, how do you fix it?  March right over to your payroll or human resources department, get a fresh W-4, and fill it out.  First you need to know your average annual refund amount.  Divide that by the number of paychecks you receive.  That will be the golden number you’re trying to get back in your hands each pay period.  What you’re looking to do is tweak your witholding allowances until you get to a point where the amount gained back equals your golden number.

And once you get that money in hand you could start throwing it at your debts, building your emergency fund or investing it in a mutual fund or index fund.  Set the transfer on autopilot every check so you don’t have to worry about it.  Then just lean back, relax and let time and compound interest work it’s magic.

If you take away only one thing from this lesson, it’s that getting a refund is bad!  If you are getting a fat refund every year, you need to fix that problem.  Be smart, don’t lend Uncle Sam your money and get nothing in return.  Now go forth and max out your money!

GET YOUR FREE PDF COPY OF MY

“GUIDE TO THRIVING ON A VARIABLE INCOME”

Learn the 5 things you need to know in order to get off the up and down rollercoaster of a variable income.  Packed with valuable, need-to-know info, it’s my thank you for joining my mailing list.

GET YOUR FREE COPY NOW!